"It's a miracle he's alive!" I'd heard that said a few times before when Clay Stafford's name had come up. Clay, and his wife Cindy, are the Awana Commanders at Riverview Baptist Church, and with the recent launch of our 35th year hosting the program, I thought it fit to sit down with the Staffords for an interview. 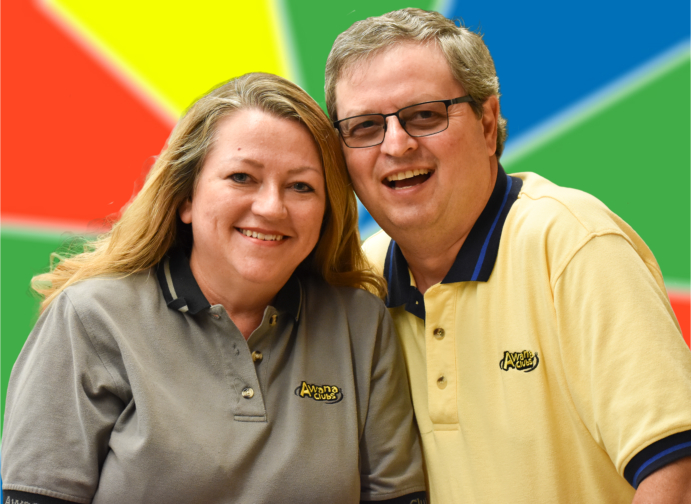 I decided to look into the story behind Clay's miracle as well. I quizzed associate pastor, Ward Harris, for his recollections on the incident; and what follows is the account as I got it from him:

"What happened is that he went to work. He is essentially an accountant, and he is a very talented individual and faithful his entire life. He worked for ATK at the Radford Arsenal. Had some issues driving in, got to work and was standing at his office door with his key in his hand, unmoving. A co-worker came up and asked “Clay, are you ok?’ He didn’t respond. He just stood there frozen. Another coworker came up and asked if he was alright, and he still didn’t respond. So they thought, we need to get him to a chair. So they backed him up and put him in a chair and they could tell something was not right. They called for the ambulance and they got him and took off."

"I got the call from Cindy herself, I think, saying that something has happened to Clay, and they think it’s a stroke. When I got to the hospital over in Radford, it was not a good situation at all. The kids were there and all that stuff. They were back there with him, they knew he had a stroke, they did the scans and when the result came back we discovered it was a major stroke. Major! The medical personal weren’t sure he would survive. I was there, Shahn was there, the doctors were very forthright and said, this is very, very bad. You need to be prepared. And of course, being a praying bunch we all prayed. Word got out and our people prayed for them. They were so active in the church -- Awana Commanders and all that -- and people just loved them."

"That night they started talking about 'mid-line shift,' and Abi looked at me and asked, 'what’s that?' Our brains are two hemispheres." Ward explained. "Typically, a stroke happens on one side or the other. Mid-line shift is when the stroke crosses into the other side. The scans showed the stroke was intensive."

"I think it was the next morning they called a specialist. The specialist looked at all the information first and walked in presuming to see a man in a vegetative state because of the severity of the stroke. Clay was sitting up in the bed, eating a meal, and he could communicate a word or two. I was told that the specialist came in and looked in the door and Clay was sitting up and he stopped. He was expecting a dying man. He said 'Well, I don’t think you need me!' Various doctors have said, 'only God can do that!' It was a testimony even of itself."

When Clay and Cindy Stafford sat down with me for this interview, Cindy explained that she'd be doing most of the talking. The stroke had happened in 2010, and Clay's astounding recovery is ongoing. Remarkably, his appearance betrays nothing. His speech, it was explained, is one area that still affords him some difficulty. Articulating his thoughts is a challenge and so he prefers not to be a chatterbox.

"So, it's the 35th year for the church, but how long have you been doing Awana?" I began.

"This is my 20th year, and this would be Clay's 19th year." Cindy answered. "I started a year before he did. I was helping with the Sparky club for the first year, and then the next year the church needed a commander, and so I suggested to Pastor Shahn that Clay would be a good fit for that position, and so he was the commander through 2010. After his stroke in 2010, I moved more into the role of co-commander. I'd been the secretary all along."

It was sounding to me like Clay had not really taken a significant break from his involvement with Awana after his stroke. I made a mental note to come back to that question. "It's obvious to me that you both have a lot of passion for this ministry," I said instead. "Where does that come from?"

"We come at this from different perspectives. My spiritual gift, I suppose, is more teaching and his is more shepherding and administrative. I think as we age and grow and change that sometimes our spiritual gift also matures and changes as we go along. His has mostly stayed the same, but mine, I think, has gravitated toward administration than teaching. We always enjoyed being around children and activities and helping, so Awana was always our perfect fit."

"So, do you have kids of your own then?"

"And they're both doing well?"

"Yes! Abi actually helps with Awana in Lynchburg at Heritage Baptist, and this is her second year being a leader there. She helps with the Cubbies"

"Ah! Lynchburg. I take it that she went to school there?"

"Yes, she has a Masters Degree in Public Health from Liberty, and she works for the medical school. Our son is also at Liberty: he's a sophomore in Aviation."

"I understand that your stoke was pretty serious." I said. "Do you want to tell me a little bit about that?"

"Nope." Clay said, and we both laughed. Cindy was speaking before the laughing was done.

"He had gone to work," she explained gravely, "and he was having the stroke as he was going in to the office on the morning of December 17, 2010. His coworkers called and said that he was sick and that the ambulance had taken him to the hospital. So, I left the house and met him there and I knew the moment I saw him that he was having a stroke. His entire face was distorted. It was a very bad stroke and it could have been fatal, but we do give the credit to the Lord because he had already passed the point of being able to have a clot-buster type shot to stop the stroke. He was past the point of being able to be helped. So, his brain continued to swell. They were going to fly him to Roanoke, but he was too unstable so they had to wait another day. They were going to actually open his brain to relieve the pressure, but the Lord did not see that that was what he wanted, so his brain stopped swelling on its own and he didn't have to have the surgery."

"Incredible!" I mused out loud. And then I asked the question that I had wanted to ask before. "So, how long did this saga last before you were back to Awana?"

"We stepped out of Awana for about a year." Cindy answered.

"Well, we were kinda out of the picture for a while." Cindy clarified. "Abi, our daughter, was still at home and a teenager at the time. She look like me, but she has her dad's DNA and so very intelligent when it come to computers and spreadsheets and she knew what he had been doing with Awana, so she was basically doing the administrative paperwork during the night and bring it home, and things like that. We stepped away for about a year, but we came back six months later physically into the program, but not actively doing anything. We resumed the next year."

I was right. The Staffords had not really taken that much of a break from Awana. I truly amazed. "In spite of having gone through something as serious as this," I commented, "as soon as you were able you were back."

"Right." She said. Clay was smiling. "It was returning to normalcy. That was very important for us."

"All these years of service, and with all the challenges you've faced, here you are still serving as passionately as ever."

"We both feel so strongly that it's beneficial. I'll use our household as an example, having two children. It was when we came to this church in about 1997, we heard about Awana for the first time. I'd never heard of it before, so I was like 'what is it? What do you do?' I had all the typical beginning kind of questions. Abi was the age of Cubbies, which is 3 and 4 year old, so she went right into the program. I immediately saw the benefit of weekly doing Bible verses and memorization and realizing that a 3 year old can memorize Bible verses. That was really important to me to know that we were helping our child hide God's Word in her heart. Of course, we had Clayton so by the time Clayton came along he just got right in. So as they both were growing older and with us both taking turns with them going through the books weekly and learning the verses together with them and really seeing how that grew our children spiritually was incredible. Awana impacted our children’s lives, and ours too!"

"Thank you!" I said. "Thank you for such a fantastic testimony."

The Awana representative for central and southwest Virginia, Wendy Shields, spoke at Riverview's 35th year Awana celebration service in September. She offered these arresting statistics: 78% if the children who grow up in church drop out by the time they’re 18 years old, but 92.7% of Awana alumni attend church weekly, and 70% of them are involved in weekly evangelism. Those are incredibly sobering numbers. I think I understand why the Staffords feel as passionately about this ministry as they do.

Awana International has a stated goal of reaching 10 million kids with the Gospel by 2020.