On Tuesday May 21, 2019, seven men gathered early in the morning on the grounds of the Riverview Baptist Church to pray. The youngest of those in attendance was 19-year-old college freshman, Seth Elliott. I had been in church the preceding Sunday when Seth was invited to the podium in the morning services to propose the idea of an early morning men’s prayer gathering to the church. I was very impressed. Here was a quite composed young man very at ease in the pulpit suggesting that the elder men of the church join him each Tuesday for prayer. I determined to interview him for a website feature. We sat down last Wednesday for a chat.

“Seth,” I began, “I was struck by what you had to say on Sunday. First of all, you were up 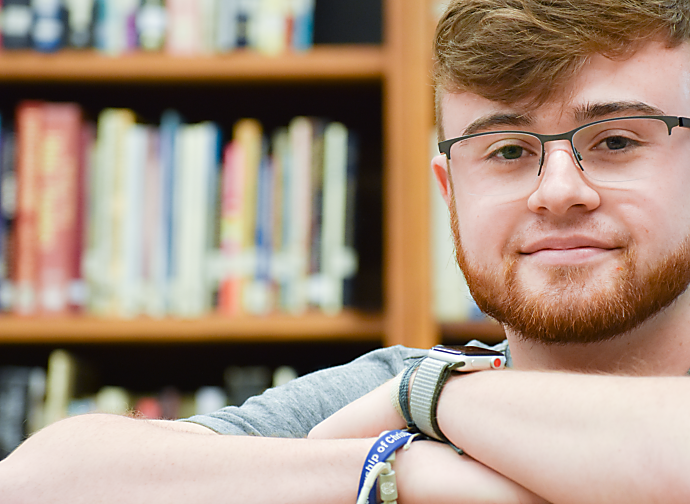 there and seemingly very comfortable.”

“Well, I don’t know about comfortable.” He chuckled. “I took a communications class in college and you’d think I’d be less nervous to get up and talk in front of people, but…”

He didn’t need to complete the statement. I didn’t doubt he’d been a little nervous - Riverview Baptist Church is not a small crowd - but his jitters had not been at all perceptible to me. Well done!

“Seth, can you tell me a little bit about your testimony?” I asked.

He answered with a smile. “When I was five I started going to school at Jefferson Christian Academy and I saw all my other friends getting saved and I was like, ‘yeah, that’s so cool. I should probably do that too!’ And that was about as far as it ever went: me saying the prayer, but then there were no actions to show what I’d done.”

“Yeah!” He said with confidence. “I really did.”

“But your life as a Christian, you’re saying, didn’t kick into high gear at that point, right?”

“Yeah.” He mused. “ I was never a bad kid. I never really got in trouble, so I guess there wasn’t really a lot that I felt that was supposed to change. But as I got older I realized that I should be doing more for Jesus. He was always there when I was doing things, but I wasn’t really doing things for Him. It was all for myself”

What a thought! “So, when did the this change happen in your life?” I probed.

“Well,” he said, “In 2013 I went to a youth something-or-another in Tennessee called ‘Resurrection’ and I rededicated my life to Christ when I was there. It didn’t change me completely. It was just like me saying yes, I’ll do more for Jesus. So He was on my mind a little bit more than He was before.”

“But,” He continued “this past January I went to a worship night at the prayer chapel on the college campus and something hit me and ever since then I’ve been on fire for Jesus.”

“I bet your parents are pretty excited about what happening spiritually in your life right now?’ I commented smiling.

“I think they are, yeah.’ He chuckled.

“So, tell me about this Tuesday morning prayer initiative of yours?” I quizzed.

“I was attending a very good church with a friend in Lynchburg where I felt really loved and accepted and I saw that they had a Tuesday morning prayer group and I thought I’d try it out, so I went and I loved it so much! So now, being home and away from it is hard because I didn’t have that encouragement for the week. I was still getting up on Tuesday mornings and praying, so I was like, ‘why not invite other men from my home church to join me while I’m here.’”

“So you called Pastor Shahn and proposed it.” I finished. “I bet he was pleased!”

Seth grinned. “He sounded really excited on the phone.”

“And how did the first session go?” I asked.

“It was really, really good.” He beamed. “All of the men who came were older than me, but it’d be great if I can get some of the younger guys to come as well.”

Seth’s prayer group meets on Tuesday mornings at 6am in the church library.