The Harris family hosted a graduation party for Kendall on June 1st and I was honored, along with my wife and daughter, to have been invited to attend. The Dean Davis Banquet Hall cannot contain an infinite number of people, after all, and this was an affair for close family and friends anyway. In my experience, the food and fellowship at Riverview is always good, so no surprise there. The high point of the afternoon was the speech Kendall’s family had coaxed her into giving. The 16 year old delivered an extremely moving talk. Her grandfather, who gave thanks for the meal after she was done, was not the only one in the room with teary eyes.

On June 1st, I found out that Kendall was a gifted speaker. That discovery was new. That 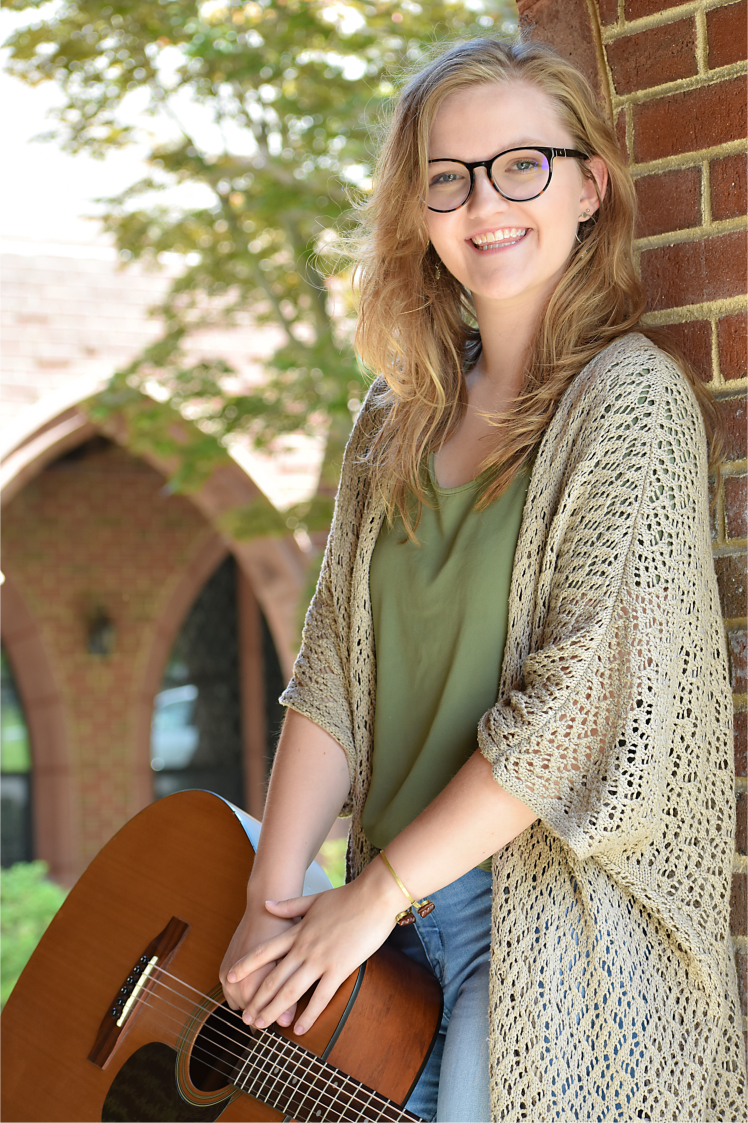 she could sing was something I’d known for a couple of years, and that obvious love for the ministry of music was one of the reasons I’d decided to arrange a conversation with her for a Spotlight feature. I began the interview the way I often start.

“So, Kendall, can you share with me your testimony?”

“Yes!” She laughed. “My dad is a pastor so I’ve been in church my whole life. I went every time the doors were opened. I was in Kindergarten at JCA - for that one year and homeschooled after that. We were in chapel on a Wednesday in the spring and they were talking about the difference between Heaven and Hell, and what living with Jesus and walking with Jesus daily was about, and I remember thinking ‘well, I want that!’”

The first thing I noticed was how well she remembered the event.

“So I waited ‘til after chapel,” she continued, “because who else was I going to talk to? My mom was a teacher. So, I went to her and said ‘you know what? I wanna be saved!’ And she said, ‘oh, well ok. Let’s call dad.’ And so we came back home after school and we were sitting on the couch right there.” She pointed. “We used to not have that, we used to have a little couch. And so dad went over the plan of salvation with me that Jesus died for my sins and was buried and rose again the third day and I got saved. Don’t doubt that whatsoever!”

“How old were you at the time?” I asked.

“I was five.” She answered.

“I was baptized almost a year after that.” She explained. And when I asked who performed the baptism she simply smiled and pointed at her dad who was sitting quietly with us showing no overt signs of pride.

“I personally liked it a lot.” She answered. “We have a great homeschool community out of our church and I think that is a great help to have that interaction with so many people. There’s a homeschool group that does things together. That’s one of the benefits of Riverview.”

“So, let’s talk about music,” I said. “You have quite a passion there. How did that start?” 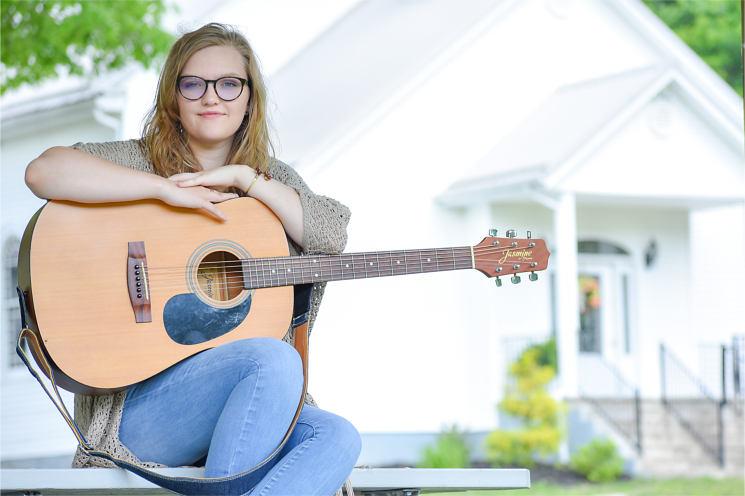 “Well, I sang from a very young age. I would run around the house singing made up songs, but I really didn’t start music until about three or four years ago. I took piano at age seven for just a few months and then my piano teacher’s dad got sick and so I stopped and didn’t really continue, because at seven if you don’t have somebody teaching you, you do what you want. Then my brother bought a guitar and wanted to learn and when he did I was like ‘I like to sing so I wanna learn as well’ so that started it and it just continued.”

“So now you’re graduating.“ I said. “What are your thoughts about the future?”

“Well, I’m graduating a year early so I’m going to take a gap year.” She explained. “Now, when most people say gap year most people think ‘oh, they’re going to go sit on there couch and do nothing, but that’s not my plan. I’m gonna go do missions somewhere, probably over the Winter-Spring semester of 2020.”

“Are you considering maybe a career in missions?” I quizzed.

“Yes! I would like to, but when you go somewhere for a week, you don’t really get to see what people do, because it’s organized and you have what you have. That’s great, but if someone wants to understand missions I think they should have a time where they say ‘well, I’m going to go spend three to six months somewhere seeing what missions is actually about.’ That’s what I want to do: to say ‘ok, Lord, is this something you want to see me pursue? If so, please, show me some of what that is like and let me grow as well.”

Can you hear it? Are you hearing the echoes of a real relationship with Jesus Christ in her words?

My conversation with Kendall went on a couple minutes more, but I want to conclude this piece with an excerpt from that moving graduation speech I was talking about earlier. I think it not only illustrates this young woman’s very real relationship with God, but it also provides a wonderful glimpse into some of the backstory that brought Kendall to where she is now.

"Around a week ago I was looking in one of my favorite books for a quote. I was looking in a book called 'The Broken Way' by Ann Voskamp. This book has changed my life if you have yet to read it especially young women, please go buy a copy. While looking in this book I found a story, the real story of Thomas. Good ole doubting Thomas. I felt a lot like Thomas a few years ago. I went through a season of life where I doubted God and walked away from Him. The biggest question I asked was 'Is God good?'

In 2016 I rededicated my life to Christ on a mission trip. After that I was living for God, but still had some doubts. I remember the next year in 2017 walking onto a plane for the first time on my way to Guatemala remembering a prayer I had said earlier in that year 'God I long for tangible proof of who you are. I need living proof to know how to move forward because I feel a little lost right now.' And slowly my eyes were opened to see just how great God is.

But at that time, I felt like a lot like Thomas in John 20:24-25 'Now Thomas (also known as Didymus), one of the Twelve, was not with the disciples when Jesus came. So the other disciples told him, 'We have seen the Lord!' But he said to them, 'Unless I see the nail marks in his hands and put my finger where the nails were, and put my hand into his side, I will not believe.'

I doubted the goodness of God. I was in a season where I doubted if He was alive and working in my life. Until I was made aware, until I found my living proof. Verse 26 and 27 says 'A week later his disciples were in the house again, and Thomas was with them. Though the doors were locked, Jesus came and stood among them and said, 'Peace be with you!' Then he said to Thomas, 'Put your finger here; see my hands. Reach out your hand and put it into my side. Stop doubting and believe.' 28 says 'Thomas said to him, 'My Lord and my God!'

I read this verse and my brain doesn’t go oh well Thomas saw the Lord and said my Lord and my God cool glad you are alive welcome, it goes my Lord and my God, I imagine Thomas being in awe of the Lord. Thomas had his doubts. The Lord gave Thomas what He needed to believe. Thomas needed proof that Jesus was alive. His proof was Jesus in the flesh. I needed proof that God is good. I realize that the proof I wanted and longed for was everywhere. I just had to open my eyes and see it.

You might be wondering why this is my graduation speech, she has finally gone bananas, too much coffee Kendall, relax. Well, this has a purpose, Thomas needed proof that Jesus was alive, I needed proof that God is good. I believe that the bible says if we ask and it gives God glory, we will receive. God doesn’t leave us empty handed. I asked and God didn’t leave me empty handed. I asked for proof of God’s goodness. Jesus left living proof inside of every believer through the Holy Spirit.

You all have been MY living proof. Whether that be letting me come to your house, or going on coffee dates, praying with me, or laughing with me and sometimes at me, showing me how to learn and grow from my mistakes, even reminding me that though the Lord takes away blessed be the name of the Lord, and a lot of times it was just a car ride. That was my living proof, those moments were and still are my proof of the goodness of God."

Well, if you didn't hear it before, you most definitely heard it now! There is a real relationshipness (that might not be a word) to this young lady's Christian faith. She talks to God. She's a talented singer, but maybe that reality of her faith is what makes her singing special.

If all goes according to plan, Kendall will be heading to Brazil to work with missionary friends for a few months early next year.